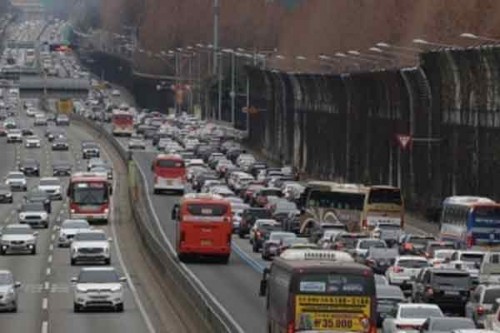 Seoul, Jan 23 (IANS) Traffic jams were witnessed on major highways across South Korea on Monday, as millions of people started to return to Seoul on the third day of the four-day Lunar New Year holiday.

This year's holiday, one of the country's largest, started on January 21, with the annual exodus of people from Seoul and its surrounding areas to their hometowns for Lunar New Year, which fell on Sunday, reports Yonhap News Agency.

With the extended holiday ending Tuesday, those same people began making their way back to the nation's capital Monday.

According to the state-run Korea Expressway Corp., traffic toward Seoul was expected to peak around 4-5 p.m. Monday, and it will likely ease around 2-3 a.m. Tuesday.

A drive from the southeastern port city of Busan to Seoul, 325 km in distance, was expected to take about seven hours and 10 minutes as of 12 p.m.

From Gangneung, 168 km east of the capital, the drive was expected to take four hours.

The Korea Expressway Corp. estimated 5.13 million vehicles would hit the road on Monday.