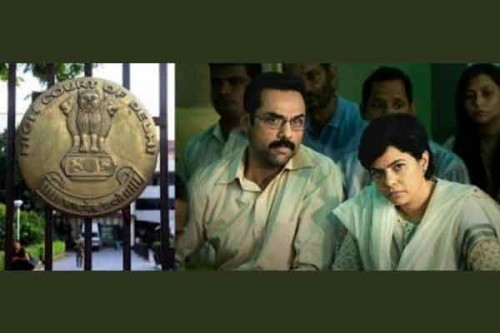 The series is expected to be launched on January 13.


Ansal had filed a suit seeking permanent and mandatory injunction against the series and a restraint of further publication and circulation of the book titled 'Trial By Fire- The tragic tale of the Uphaar Tragedy'.

Neelam and Shekhar Krishnamoorthy, who lost their two young children in the 1997 fire catastrophe, are the authors of the book.

In November 2021, a CMM court sentenced Gopal Ansal and his brother Sushil Ansal to seven years in prison each for tampering with evidence in the tragic 1997 Uphaar fire. However, the sessions court lowered it to the already-completed period in July of last year, thus they were released after serving little over eight months of the total sentence.

Neelam also serves as the chairperson of the Association of the Victims of the Uphaar Tragedy, which has fought long and hard for justice against Sushil and Gopal Ansal.

Representing Ansal, Senior Advocate Siddharth Aggarwal stated that Ansal's real name is used three times in the trailer, hurting his reputation and other rights, despite the series' warning that it is a piece of fiction.

In response, Justice Varma said: "This may be their critique of their judgment and anguish of the parents, but it cannot be a claim for defamation."

"Today the only glimpse we have into what's going to be released is the book which makes it clear that I've gotten away scot free," Ansal's counsel contended.

"What we have today is more than a prima facie basis to make an allegation that the movie is going to be a mischaracterisation of me, the process and judgments," he further said.

Senior Advocate Rajiv Nayar appearing for Netflix submitted: "On September 19, 2016 the book was released. On December 18, 2019, there are news reports that a web series is going to be created. On November 8, 2021, the plaintiff was sentenced to 7 years with Rs 2.25 crore, widely reported by the media.

"There is an appeal in the sessions court and in July, conviction is upheld but reduces the sentence for the period already undergone. This is all in the public domain. But what's more significant is the date of December 14, 2022 where we announce that we're going to have web series from January 13. On December 14 our intention to screen it on January 13 is shown to the press. And this plaintiff knocks on the door at the last minute."

Senior advocate Vikas Pahwa argued on behalf of Krishnamoorthy that Ansal was previously aware of the book's publishing because it was mentioned in a 2012 plea presented to the Supreme Court.

Responding to which, Nayar argued: "I have to interject. I didn't know about this. A gentleman who tampers with evidence, who was convicted for section 304A, should now be convicted for perjury? Complete misrepresentation of fact."

Ansal has contended that the publication of the contested series will further harm him and will constitute a major violation of his fundamental rights, particularly his right to privacy.

Ansal also claimed in the lawsuit that he had apologised to the victims' families in front of the Supreme Court and expressed regret for the terrible incident.

Additionally, he claims that after learning that the contested series is based on the contested book, he purchased a copy of it and was shocked to find that it contained a one-sided narration of the unfortunate incident.