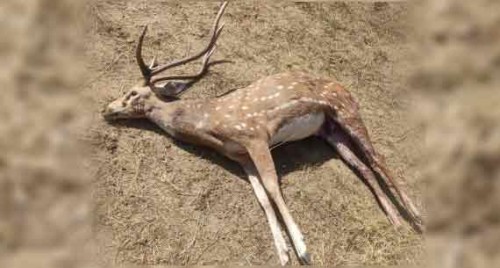 Kolkata, Dec 10 (IANS) Heads have started rolling at Bengal Safari Park at Siliguri in Darjeeling district in West Bengal over frequent deaths of spotted deer there.

On Friday, IANS reported that as many as 27 spotted deer died within a period of just two months at the Bengal Safari Park reportedly due to gross negligence on part of the safari park authorities. Even before 24 hours have passed since then, the state forest department has issued a notification transferring both the director and assistant director of the safari park.

Confirming the transfers, state forest minister, Jyotipriyo Mullick said that he has taken the matter quite seriously and the director and the assistant directors of the Bengali Safari Park have been removed. A thorough probe has been ordered to find out the reason behind so many deer deaths and to suggest corrective measures to avoid such tragedies in future," Mullick said.

It is learnt that the Bengal Safari Park director, Dawa Sangmu Sherpa has been transferred as the divisional forest officer of the Raiganj division and she has been replaced by Kamal Sarkar, who is presently DFO of Raiganj division.

Similarly, the assistant director of the Bengal Safari Park, Anuradha Rai has been transferred to the records section of the planning & working division at Darjeeling.

The allegation against the Bengal Safari Park authorities was that they ignored repeated warnings from wildlife activist groups about the broken fencing walls of the deer enclosure within the safari park premises. Because of the broken fencing walls, the deer reportedly used to come out of the enclosure and consume waste food near the staff canteen and mushrooms which resulted in food poisoning.

This week, an Australian Kangaroo Alex, which was rescued from the clutches of the wildlife smugglers in north Bengal and sheltered in Bengal Safari Park, died reportedly because of food-poisoning after consuming mushrooms.

IANS also reported on Friday that the number of spotted deer at the park, which was around 750 a year back, has come down to below 700 as on date with the maximum deaths occurring during the last two months.