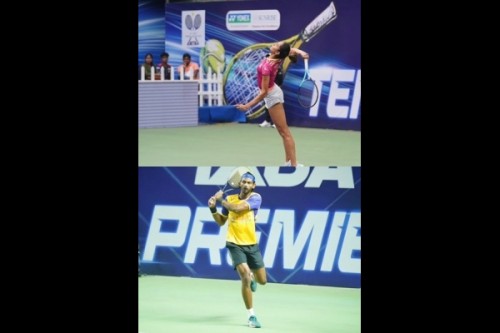 Pune, Dec 9 (IANS) Bengaluru Spartans displaced Hyderabad Strikers from the top of the points table at the end of second day's play at the ongoing Tennis Premier League (TPL) season 4 at the Balewadi Stadium, here on Thursday.

Bengaluru Spartans jumped to top of the table as they had amassed 88 points by the end of Day 2, while Finecab Hyderabad Strikers were at the 2nd spot in the table with 87 points.

Pune Jaguars sit 3rd after the fixtures on Day 2 with 85 points with Mumbai Leon Army right on their heels with 84 points. Chennai Stallions and Gujarat Panthers are at 5th and 6th place in the table respectively with 80 points apiece.

Delhi Binny's Brigade are 7th in the table with 71 points. Punjab Tigers had slipped to the foot of the table as the newest franchise of the Tennis Premier League had managed to score 65 points by the end of Day 2.

The round of fixtures on day 2 of the Tennis Premier League began with a highly anticipated clash between Finecab Hyderabad Strikers and Bengaluru Spartans. The match started with the women's singles category as Karman Kaur Thandi of Bengaluru Spartans went up against Conny Perrin of Finecab Hyderabad Strikers. The game ended 14-6 in favour of Conny Perrin.

It was followed by the Men's Singles category Manish Sureshkumar of the Gujarat Panthers took on Arjun Khade of Pune Jaguars, which ended 12-8 in favour of Pune Jaguars.

Manish Sureshkumar and Divij Sharan of Gujarat Panthers went up against Arjun Khade and Vijay Kumar Prashanth of the Pune Jaguars in the Men's Doubles category, which ended in a draw as the scores were tied at 10 all.

The final tie of the game was the Mixed Doubles category, in which Ankita Raina and Divij Sharan of Gujarat Panthers beat Rutuja Bhosale and Vijay Kumar Prashanth of Pune Jaguars, with a score of 13-7. At the end of the match, the Pune Jaguars had emerged victorious as they had scored 45 points whereas the Gujarat Panthers only scored 35 points.

The Men's Singles category saw two international stars go up against each other in Mathias Bourge of Chennai Stallions taking on Malek Jaziri of Punjab Tigers, which ended 12-8 in favour of Mathias Bourge.

The tie was followed by the Men's Doubles. Mathias Bourge and Anirudh Chandershekhar of Chennai Stallions went up against Denis Istomin and Malek Jaziri of Punjab Tigers, in which Chennai Stallions emerged victorious after the tie ended 13-7.

The day was closed out by the Mixed Doubles category in which Siddhanth Banthia and Sowjanya Bavisetti represented Delhi Binny's Brigade who lost to Jeevan Nedunchezhiyan and Valeriya Strakhova of Mumbai Leon Army, after the tie ended 11-9.

Mumbai Leon Army emerged victorious against Delhi Binny's Brigade after the fixture ended 49-31 to close out the second day of season 4 of the Tennis Premier League.