Give befitting reply to propaganda against us: Hasina tells student leaders 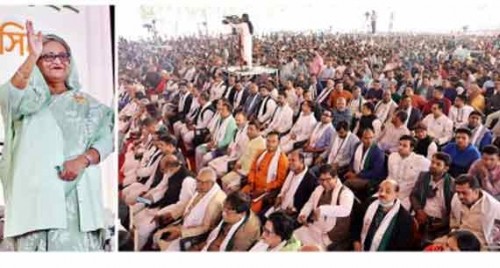 Dhaka, Dec 7 (IANS) Bangladesh Prime Minister Sheikh Hasina asked leaders and activists of the Bangladesh Chhatra League (BCL), the student wing of the ruling Awami League, to give a befitting reply to propaganda against the ruling party on social media.

"I ask BCL leaders and activists to give appropriate reply to propaganda against us on social media using the advantage of digital Bangladesh," she said while addressing the 30th national council of the BCL at the historic Suhrawardy Udyan in Dhaka.

The premier suggested that "providing information online regarding their (BNP-Jamaat alliance) misdeeds such as arson, terrorism, killing of innocent people, corruption, and vote rigging during their tenure as a reply to the propaganda".

"It will be enough to stop their propaganda against us and the BCL will be able to do it," she opined.

Sheikh Hasina also reiterated her call to the country not to pay heed to rumours that banks do not have funds money.

"We have no problem... Each of the banks have money. So, I request all not to pay heed to any rumour."

The Prime Minister reminded the BCL leaders and workers about the student wing's contribution to the progressive movements of Bangladesh, saying that the "history of the Chhatra League is the history of Bangladesh".

She said the BCL played a significant role in each progressive movement such as the language movement in 1952; the six-point demand in 1966; the mass upsurge in 1969; and the Liberation War to dislodge Ershad and Khaleda Zia's government.

Hasina also said the BCL is at the top of the list of martyrs who sacrificed their lives for the noble cause of saving the country.

"So, I hope the Chhatra League will contribute immensely to the development of the country," she added.

A one-minute silence was observed for late BCL leaders.

Hasina further said that Bangladesh has been recognised as a developing country since the Awami League government came to power in 2009.

She said the Awami League is the only party in Bangladesh's history that handed over power peacefully upon completion of its five-year tenure in 2001.

"Awami League had handed over power peacefully (in 2001) as it believes in democracy and the power of the people," she said.