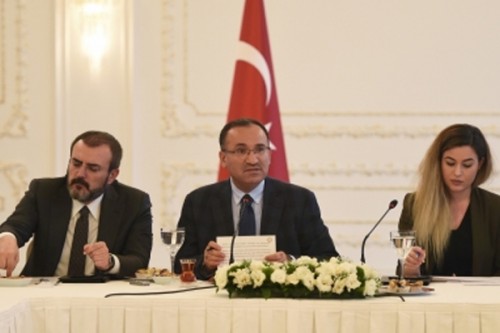 "The Swedish government deported a PKK terrorist and sent him to Turkey. If you ask what it means in terms of this process, we see it as a start in terms of showing sincerity and goodwill. I hope it continues with the same sincerity," Bozdag told local media on Monday.

On December 3, Sweden deported Turkish citizen Mahmut Tat, who had sought asylum in Stockholm in 2015 after being sentenced in Turkey to six years and 10 months in prison for being affiliated with the PKK.

He was detained by Swedish police on November 22.

Sweden's move comes over Turkey's pressure for the extradition of several suspects for being members of the groups which Ankara designated as terrorist organizations.

Finland and Sweden's NATO bid was initially blocked by Ankara, which accused them of supporting anti-Turkey groups as they rejected the extradition requests for the suspects affiliated with the PKK and the Gulen movement.

On June 28, Turkey, Sweden and Finland reached a trilateral memorandum of understanding (MoU) ahead of the NATO Madrid summit.

Sweden and Finland pledged to support Turkey's fight against terrorism and agreed to address Ankara's pending deportation or extradition requests for terror suspects expeditiously and thoroughly.

Turkey remains one of the two NATO members yet to ratify their accession, as Ankara has been complaining that the two countries have moved too slowly in fulfilling their commitments over the Turkish security concerns.

The PKK, listed as a terror organization by Turkey, the US and the EU, has been rebelling against the Turkish government for more than three decades.

The Gulen movement, led by the US-based Muslim preacher Fethullah Gulen, has been accused by the Turkish government of masterminding the 2016 failed coup to topple the government.