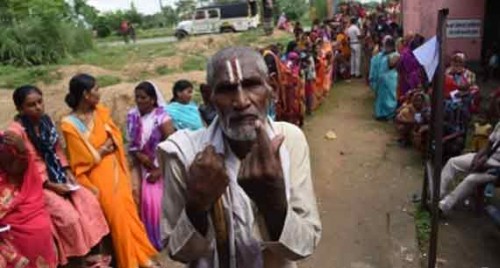 Patna, Dec 5 (IANS) An 11 per cent voter turnout was recorded till 9 a.m in bypoll to Bihar's Kurhani where 3,11,728 voters are likely to decide the fate of 13 candidates, as per the Election Commission data.

According to the EC, the voting got underway at 7 a.m and will conclude at 6 p.m.

Long queues of voters could be seen outside 320 polling booths in this Assembly constituency.

The main contest is between JD-U candidate Manoj Kushwaha and BJP candidate Kedar Gupta. Besides, Gulam Murtaza Ansari of AIMIM and Nilabh Kumar of Vikassheel Insaan Party (VIP) are also in the field.

Ansari and Kumar could turn out to be vote 'katwas' (divider of votes) respectively for JD-U and BJP.

During the recently concluded Gopalganj bypoll, AIMIM and BSP candidates turned out to be 'vote katwas' for the RJD candidate, who lost the election with a narrow margin of 1,794 votes.

Candidates of AIMIM and BSP bagged 20,000 votes of Muslims and Yadavs who are considered as the core vote bank of the RJD.

As per the sources, learning a lesson from Gopalganj bypoll, the JD-U asked VIP to bring a candidate who belongs to upper caste Bhumihar community to cut the votes of BJP.