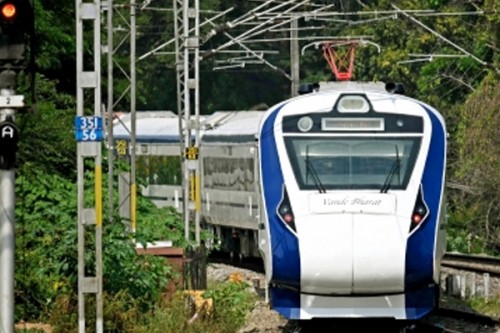 Hyderabad, Dec 4 (IANS) The new generation Vande Bharat train is likely to be launched between Secunderabad Railway Station here and Vijayawada in neighbouring Andhra Pradesh from the new year.

This will be the first such indigenously-built semi high-speed rail in South Central Railway (SCR) and second such train in south India.

The first Vande Bharat in south India was launched between Chennai and Mysuru last month.

The Railway Ministry has given approval for Vande Bharat train on Secunderabad-Vijayawada route.

However, the date for the same will be finalised after the railway authorities complete track upgradation.

There are plans to extend the train to Visakhapatnam in February. Sources said a study will soon be undertaken on the feasibility of operating the train between Vijayawada and Visakhapatnam.

Officials said Secunderabad-Vijayawada Vande Bharat will be the sixth such high-speed train in the country.

The first Vande Bharat Express train was flagged off on the New Delhi-Kanpur-Allahabad-Varanasi route on February 15, 2019.

The Vande Bharat Express can run up to a maximum commercial speed of 160 kmph. Currently the train on Secunderabad-Vijayawada track via Kazipet can run at maximum speed of 130 kmph.

The Vande Bharat Express has travel classes like Shatabdi Train, but with a better travel experience for passengers.

Each Vande Bharat has a total seating capacity of 1,128 passengers with all coaches equipped with automatic doors; a GPS-based audio-visual passenger information system, onboard hotspot Wi-Fi for entertainment purposes, and comfortable seating.

Kishan Reddy has also requested the Railway Ministry to introduce Vanda Bharat Express between Secunderabad and Tirupati. However, this is likely to take time due to constraints in meeting the demand for rolling stock.

Integral Coach Factory (ICF) at Perambur in Chennai is designing and manufacturing Vande Bharat Express trains under the Make in India initiative.