Rohit, Kohli return as India brace themselves for Bangladesh challenge in ODIs 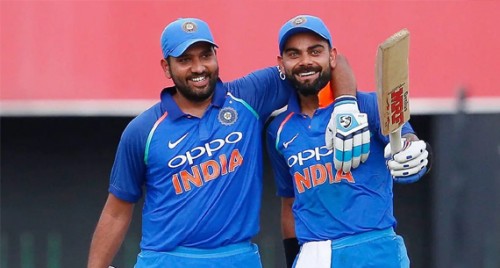 Dhaka, Dec 3 (IANS) With T20 World Cups happening in 2021 and 2022, there was very little focus on ODI cricket. But now with the 2023 ODI World Cup less than 12 months, suddenly the format seems to have gained high importance in the eyes of teams and fans.

After a young side went to New Zealand and lost the only ODI of the series with the next two matches being rain-affected, Rohit Sharma, Virat Kohli, and KL Rahul are back as India brace themselves for the challenge from Bangladesh in the series opener on Sunday at the Sher-e-Bangla National Cricket Stadium (SBNCS) in Mirpur, Dhaka.

The ODIs against Bangladesh will also mark the re-uniting of Rohit, Shikhar Dhawan and Kohli as the top three. Since the 2019 World Cup, the trio have featured in just 12 ODIs together.

It remains to be seen if the opening pair of Rohit and Dhawan will be able to give India an aggressive start in the first ten overs and whether Kohli can carry his sizzling T20I form into a format where he has been a master of acing chases.

The focus will also be on India's middle-order, especially on who will bat at four, five and six. Rahul had established himself in the middle-order through stellar performances, and Shreyas Iyer has been consistently impressive in whatever opportunities he has got in absence of star-studded players in the format.

Rishabh Pant offers a left-handed option in the middle-order, but even his ardent fans will agree that he has to get the big runs against Bangladesh to keep himself in the reckoning, especially with contenders like Ishan Kishan and Sanju Samson (who is not a part of this series).

In terms of bowlers, Axar Patel and Washington Sundar are the favourites for the spin combination. As far as fast-bowling is concerned, Shardul Thakur, Mohammed Siraj, Deepak Chahar, Kuldeep Sen, and Umran Malik are in the mix. It should be interesting to see what balance India opt for in the ODIs in Bangladesh.

Bangladesh, on the other hand, will be without regular ODI skipper Tamim Iqbal due to a groin injury, and Taskin Ahmed, due to reoccurrence of a back injury. With an experienced opener and pacer gone, stand-in captain Litton Das will have to get the best out of the resources he has.

Litton, who sparkled with 63 against India in T20 World Cup in Adelaide, will need senior players like Shakib Al Hasan, Mushfiqur Rahim and Mahmudullah to step up in their roles. Others like Afif Hossain, Yasir Ali, Mehidy Hasan Miraz and Anamul Haque will be expected to come in and rescue Bangladesh from tough situations.

In the fast-bowling department, left-arm pacer Mustafizur Rahman, who was the breakout star with 13 wickets to give Bangladesh a memorable ODI series win over India in 2015, will be the leader of the bowling attack with Hasan Mahmud and Ebadot Hossain. But with star players back in the mix, India would be hoping to win an ODI series in Bangladesh, something which hasn't happened since October 2016.