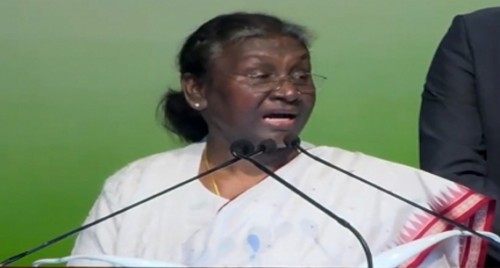 The President, who was on a two-day tour in Haryana, interacted directly with the doctors, ASHA workers, and ANMs associated with state's Beti Bachao-Beti Padhao campaign.

The President also interacted with women sportspersons of the state during a programme organised at Raj Bhavan here where Governor Bandaru Dattatreya and Chief Minister Manohar Lal Khattar were, among other dignatories.

Murmu said the "daughters are the embodiment of power. Every family should cooperate in taking daughters forward in every field so that they become empowered and continue to increase their contribution in every field."

"The way the daughters of Haryana have raised the pride of their families and the state on the global stage in the sports field is one of the best examples of women empowerment," said the President.

She praised the Governor and the Chief Minister for the successful implementation of the Beti Bachao-Beti Padhao campaign in Haryana and hoped that Haryana will continue to boost the morale of the state daughters by taking such revolutionary steps.