Protest is easy, but not governance: Inexperienced Kerala FM feels the heat 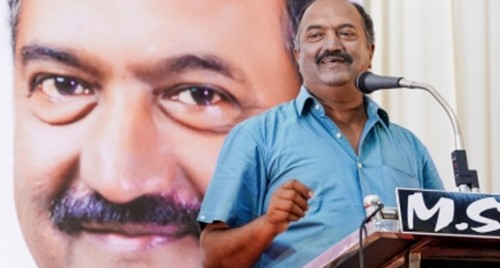 Thiruvananthapuram, Nov 30 (IANS) After occupying the Finance Minister's seat of cash-strapped Kerala for more than a year, the harsh realities of governance finally seems to be dawning on the inexperienced K.N.Balagopal, as he finds it increasingly difficult to prepare a realistic new state budget, next year.


During his student days, it was just protests for him, whenever the Congress-led government tried to find new ways of increasing revenues.

The now 59-year-old Balagopal rose from the student ranks with one stint at the Rajya Sabha.

By his own admission made before the media, Balagopal on Wednesday said it's time that rates of various government charges are hiked.

"For almost three to four decades, the charges have continued without any changes. It's high time that it's hiked," said Balagopal.

Whenever former Congress Chief Ministers - K.Karunakaran, A.K.Antony and Oommen Chandy raised the bus fares and other charges, there were protests.

Incidentally, Balagopal who began from the SFI, then upgraded to the Youth wing and finally made it to the CPI-M was earlier known for participating in the massive protests -- be it against the introduction of autonomous educational institutions, availing of loans from World Bank or similar funding agencies.

Today, Chief Minister Pinarayi Vijayan speaks of turning Kerala into an educational hub, wherein foreign Universities will be given the nod and availing of loans from funding institutions has become the order of the day and if not for that, Kerala's financial position would have gone haywire.

Another thing which he said was it's time to screen the list of those receiving monthly social welfare pension of Rs 1,600 from the government.

"One screening of the list revealed that there are 4,000 people who receive this pension along with other government pensions. The list has a lot of irregularities and it has to be screened, as this pension is to be given only to the most needy," said Balagopal.

Incidentally of the 3.30 crore Kerala population, around one fifth is getting social welfare pension, which by all means is a huge number.

"Yes, it's true and this list swelled due to inclusion of various categories and hence it has to be screened and those who are ineligible for this will be weeded out," added Balagopal.

Incidentally, one of the key campaign points at the April 2021 Assembly polls of the CPI(M)-led Left was how they are giving social welfare pensions to the people and they plan to hike the rates too.

A media critic on condition of anonymity said the biggest problem of Balagopal is he succeeded economist turned Finance Minister and his senior party colleague Thomas Isaac.

"That's a big shoes to fill for Balagopal and while Isaac being an economics teacher, unlike Balagopal who was always seen in all the protests when he was a student and youth leader, lot of questions will be asked to Balagopal, on why he has a change in his stand, when he became a minister," said the critic.

Summing up it in one sentence Balagopal said times have changed from the past, so changes are imminent.