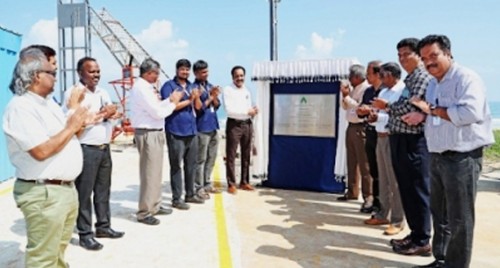 Agnikul Cosmos, the city-based rocket startup, said the launchpad and the mission control centre was designed by it and executed with the support of Indian Space Research Organisation (ISRO) and private sector space regulator IN-SPACe.

The facility was inaugurated by Secretary, Department of Space, and ISRO Chairman S. Somanath on November 25 said Agnikul Cosmos.

"The launchpad is specifically built keeping in mind the ability to support liquid stage controlled launches, while also addressing the need for ISRO's range operations team to monitor key flight safety parameters during launches. Additionally, it has the ability to, as necessary, share data and other critical information with ISRO's Mission Control Centre," the startup added.

Adding further, the company said the launch of its first rocket will happen from its own launchpad. The mission would be a technology demonstrator that will mirror Agnikul's orbital launch but at a reduced scale.

"The first exclusive launch pad for a private launch vehicle has co me up at the SDSC. Now India can travel to space from one more space platform. Thanks to Agnikul," Somanath said.

The ability to launch from our own launchpad while still working with ISRO's launch operations teams is a privilege that we have been granted by ISRO and IN-SPACe, said Srinath Ravichandran, Co-Founder and CEO, Agnikul Cosmos.

The company and ISRO is silent on the contours of the agreement with ISRO like the lease amount for the land on which the facilities have come up or other details.