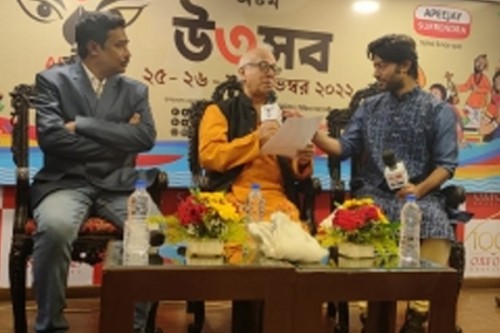 Kolkata, Nov 26 (IANS) The Bengali little magazine segment, which is considered as the breeding ground for several literary icons from West Bengal, finally got its first organised showcase-cum-marketing platform on Friday.

The city's iconic Oxford Bookstores inaugurated its 'Bengali Little Magazine Corner' on Friday, where publishers of little magazines will be able to showcase their works and also be able to market and sell their products online.

The little magazine corner was inaugurated by noted educationist and linguist Pabitra Sarkar, on the inaugural day of the eighth edition of Apeejay Bangla Sahitya Utsob (ABSU), the country's first Bengali literature festival.

According to the CEO of Oxford Bookstores, Swagat Sengupta, who is also the ABSU director, although there approximately 2,000 little magazines are published in Bengali throughout India, there was no organised platform for showcasing them.

"Despite producing excellent literary work, Bengali little magazines have struggled to reach out to a wider audience. This special Bengali Little Magazine Corner, which will be free of cost for the publishers, will fill up that gap to a great extent. Our online store is also considering selling these little magazines online in order to reach a wider audience against a modest revenue-sharing model," Sengupta added.

Speaking at the inauguration function, Sarkar said that some stalls on the streets of Kolkata selling little magazines have become extinct now.

"Undoubtedly this is a fantastic initiative. Little magazines have a dedicated readership; the literature they publish is distinctive and not typically found in popular culture. This initiative will do this little magazine community, its authors, and its readers a world of good," Sarkar said.